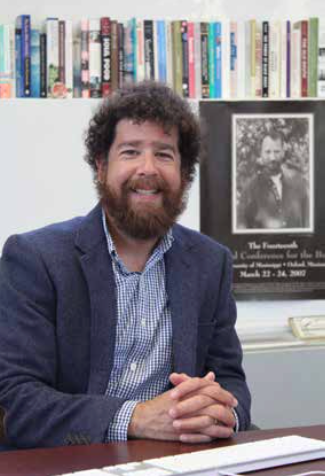 Wander through the maze of Barnard Observatory, past multiple rows of dark wood bookcases, and begin at the base of the curved stairwell, not the main one, but the one off to the right. Climb two sets of pre-Civil War stair- wells and land in Jimmy Thomas’ office. Seriously, land in it—no door, no office number, no secretary answering a phone. Just look up and be greeted by a light-infused circular room and a soft, friendly smile from Thomas himself.

Thomas is the associate director for publications at the Center for the Study of Southern Culture, located in the east wing of Barnard Observatory on the University of Mississippi campus. Thomas has not only worked for the Center since 2003, but he also is an adjunct professor in the Department of Writing and Rhetoric.

“I came on board to work on the New Encyclopedia of
Southern Culture,” Thomas said. “It is a 24-volume encyclopedia ranging from everything from religion in the South to race. It includes things like art and architecture, language, ethnicity, literature, the environment and so on. I originally came on as a project manager, and we would publish about four a year.”

Ted Ownby, director of the Center for the Study of Southern Culture, said that Thomas’ knack for making sure that the encyclopedias were published on time was impressive. “First of all, Jimmy is a really good editor,” Ownby said. “He is extraordinary with deadlines. I think 23 of the 24 volumes of the New Encyclopedia came out on time. I think that is virtually unheard of in academic publishing history. So, he holds up to those standards, that no, we do not publish roughly on time—we publish on time.”

Thomas grew up in the Mississippi Delta, specifically Leland and Greenville, and graduated from UM with a bachelor’s degree in English and philosophy in 1994 and a master’s degree in Southern Studies in 2007. After finishing his master’s, Thomas began teaching Liberal Arts 102, which is an alternative to Writing 102 and is offered through the Department of Writing and Rhetoric. LIBA 102, a first-year seminar, is only available for freshmen students to take after they have completed a 101 writing course.

Thomas said that the advantage of taking LIBA 102 instead of Writing 102 is that students would be taking a research writing course from an expert in that subject, whether it is Southern Studies or even engineering.

Sara Seckman, senior communication sciences and disorders major from Atlanta, took Thomas’ class in the spring of her freshman year. “I was told that LIBA classes were a fun alternative to writing courses,” Seckman said. “I saw that the subject was Southern Studies and thought that it would be cool. We are Ole Miss, and I feel like it is the epicenter of Southern studies.”

Seckman said that Thomas is her favorite professor at UM.

“He was the first professor in college that just made me feel like that I could do it, like I could conquer the class,” Seckman said. “I really got into my final research project, because I enjoyed the class so much. He just made me feel like a great student. He is passionate about what he does, and it really comes out in his teaching.”

In Thomas’ research writing class, each student writes three research papers—two shorter papers and one eight- to 10-page paper. For the final project, students pick an iconic Southern person, place, thing or event and write about it.

“I chose to write about voodoo in New Orleans for my final project,” Seckman said. “I called some shops down there and had these crazy conversations with some crazy people that I would have never talked to before. He gave us free rein and let us get creative with it.”

Getting the students to be engaged intellectually and to care about the subject that they are writing about is how Thomas said he influences his students’ greater understanding of writing.

“If you are interested in the topic, if you want to know more about it, then you are going to do better,” Thomas said. “But getting them to care about language—the way we communicate—is a big challenge. But if you can do that, then you are kind of there.”

Thomas said that his favorite parts about teaching are getting to know the students and watching them improve their writing over the course of the semester.

“They do not have to be Faulkner when they walk out of my class, but if they can walk out of the class and feel like they have accomplished something, then that makes it worthwhile.”