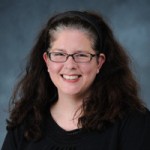 Wendy Goldberg is a core instructor in the Department of Rhetoric at the University of Mississippi.  The six years prior to joining UM, she taught composition and speech at The United States Coast Guard Academy (New London, CT). She has also taught composition and literature courses at the University of Connecticut (Storrs, CT) and Three Rivers Community College (Norwich, CT) as well as summer courses at the Johns Hopkins’ Center for Talented Youth.  She has presented and published papers on comics and anime and is currently the submissions editor for Mechademia, an annual forum for critical work on Japanese manga, anime, and related arts.